'Bring your hubby back when you're ready to buy'

PHILADELPHIA -- "How many people have changed a tire?" instructor Lori Johnson asked the dozen women gathered in a residential Philadelphia driveway around a brand-new Volkswagen Passat.

"It makes no sense to be waiting an hour for AAA to come" after getting a flat on the highway, Johnson said.

Johnson, the petite, spiky-haired entrepreneur behind start-up Ladies Start Your Engines! used to work in an auto dealer service department. She started her instructional service for women this year because of what she often witnessed from male fellow wrench-turners: condescension toward, and sometimes exploitation of, female customers.

Representing half of all new car buyers and wielding increasing economic clout, women are commanding more respect from automakers, car dealers, and their service departments -- but experts say there's plenty room for improvement. And services, websites, and magazines are sprouting up to help women demand it.

"We do not feel respected" by the male-dominated industry, said Jody DeVere, president of AskPatty.com, a website about cars geared toward women.

The site says it offers "a safe place for women to get advice on car purchases, maintenance, and other automotive related topics," through interactive e-mail, blogs, and "womanars," Web-based seminars delivered by female automotive experts.

DeVere said she is confronted all the time with the question "why do women need a special website, special marketing, etc. -- cars are cars, right?"

She insists, "I'm not a screaming feminist," but says the sexes have different preferred modes of communication, and differing perceptions of what makes a good car.

Women spend more time on the Internet researching cars, for example, preferring to avoid the high-pressure, confrontational experience of a dealership until they're armed with information, said Courtney Caldwell, publisher of Road & Travel Magazine.

"Women and men want the same things from a car, but they prioritize them differently," said Caldwell, whose online magazine content is oriented toward female readers.

For women, a vehicle's safety is the top priority. For men, performance and styling are high priority with safety an afterthought.

One of the top drivers of traffic to the female-oriented sites and Johnson's class is discomfort with dealers -- inappropriate sexual comments, a "bring your husband back when you're ready to buy" attitude, and the suspicion of being ripped off, get mentioned often.

According to some estimates, women fill out 85 percent of the "customer satisfaction index" forms that consumers return after a car purchase or repair.

"They are more likely to complete those forms, because they tend to be less confrontational," DeVere said.

Those forms are sent to car manufacturers and inform the companies as they decide how to allocate corporate goodies, such as advertising money and the most desirable vehicles, to dealers.Continued... 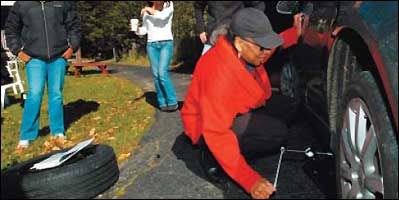 Jackie Thompson learns to change a tire at a Ladies Start Your Engines! auto repair class for women in Philadelphia. (Photos By April Saul/Philadelphia Inquirer Via Mcclatchy-Tribune)