AskPatty at the Wall Street Journal: Selling a Car? Speak to the Missus 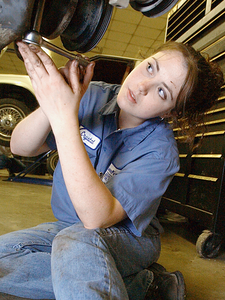 A sign of things to come? (Photo: Associated Press)

For many women, the thought of buying or fixing a car comes with the anticipation of an inevitable rip-off. But the automotive industry is changing, thanks in part to a handful of women working on the inside.

Car dealerships can now choose to be "certified female friendly." The designation is given to dealers who complete a training program that is supposed to make their showrooms and service centers more female-friendly. So far, 220 dealerships in cities from Los Angeles to Denver, New York and Orlando have attained "female-friendly" status.

Jody DeVere, the program's creator and founder of AskPatty.com an auto-advice Web site aimed at women, hopes to do away with the "calendars of naked women hanging over the desks of dealership employees," for example. She points out the Road & Travel Magazine statistic that women now buy 65% of all new cars and 53% of all used cars. Women influence 95% of auto purchases overall, yet Ms. DeVere says even she has felt uncomfortable buying a car.

In a recent incident, Ms. DeVere selected a new car for herself at a dealership and followed the salesperson to his office to start hammering out the financing. A male friend of hers — "not my husband, not my boyfriend" — arrived halfway through the negotiations, and the salesperson immediately started directing all of the questions toward the male friend. "There's an assumption when a man and a woman go to the dealership together to direct questions to the man," Ms. DeVere says.

Amy Mattinat is co-owner of Autocraftsmen, a repair shop in Montpelier, Vt., that presents itself as especially accommodating to women. Ms. Mattinat sees herself as a communication facilitator, translating her technicians' diagnoses into language that's easier for people with no automotive knowledge to understand.

Ms. Mattinat claims "a few bad eggs" have given the auto repair industry an undeservedly bad reputation. But she still advises women to check a repair shop for the right certifications — ASE (Automotive Society for Excellence), Blue Seal (three-quarters of a shop's technicians are designated "masters"), as well as membership in the Better Business Bureau. And she recommends asking as many questions as it takes to actually understand what's wrong with a car in the shop and what is needed to fix it.

Another secret: Women aren't uniquely ignorant. Men these days know less and less about cars. "Those skills are absolutely excess to people's needs in most cities," explains Mary Jackson, an automotive industry consultant who put herself through graduate school by working at an auto-body repair shop.

Ms. Jackson says it's important for everyone — not just women — to gain some basic understanding of how a car works. She recommends finding a good book on the basics of auto mechanics, one with plentiful illustrations, and studying up. She also recommends getting a second opinion on a work order.

Ms. DeVere hopes more women will choose to work in the automotive industry, another change that could help neutralize the environment. According to the National Automobile Dealer's Association, only 7% of car salespeople are women. But this year NADA boasts a female chairman: Annette Sykora.

Readers: What's been your experience when buying a car or bringing a car into the shop? Is it tougher out there for women than for men? — Emily Flitter