Small Companies Are Finding a Home on the Web

Jody DeVere, is president of AskPatty.com, a website that is geared to women drivers.

The Web site for Sophia Brodsky’s day spa in Philadelphia, the Body Klinic, was pretty rudimentary until a college student walked into the spa a little more than two years ago with an irresistible offer.

Skip to next paragraph 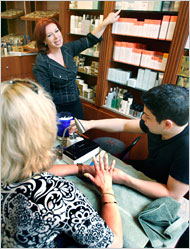 As she tells it, the student, Nathaniel Stevens, said that for $10 he would take her existing site and redesign it to drive traffic to her salon. If she got more business, they agreed, he would get additional money. Ms. Brodsky, a Russian immigrant whose interests run more to cranberry facials than the Internet, thought why not.

Ms. Brodsky now maintains three Web sites and estimates that they have brought in thousands of dollars in business. “Now,” she said, “people are coming to my Web site daily.”

Still, the Web as an alternative yellow pages, along with blogs and social networking, is drawing increased attention. The Kelsey Group, a market research company in Princeton, N.J., estimates sales revenue from Internet yellow pages, searches for local businesses and searches on wireless devices will increase to $13 billion in 2010 from $3.4 billion in 2005. Those small-business owners who venture online say the experience is generally worth it though the learning curve may be steep. Recognizing this, online advertising companies with names like Yodle, Weblistic, WebVisible and ReachLocal are springing up to help in managing the sites.

The Web was not on Ms. Brodsky’s mind when she put down $165,000 in 2004 in the Rittenhouse Square area for a spa that grossed about $6,000 a week. The spa was not even computerized at the time and had a staff of seven that she felt was not adequately trained for the upscale clientele she wanted to serve.

Experts generally advise small-business owners not to establish a Web presence unless they have time to keep it updated. Jean A. Pratt, assistant professor of information systems at the University of Wisconsin, Eau Claire, said, “If someone doesn’t maintain a Web site, it does become more of a detriment because competitors are keen on making theirs part of a marketing strategy.” A static site may damage the credibility of the business, she added.

Jody DeVere, president of askpatty.com, an automotive advice site for women that started in 2006, said she was determined not to let that happen when she was developing the site. To avoid spending $50 to $200 an hour for a Web developer, she spent several weeks learning how to blog, which included posting feature articles and tagging entries properly.

To gauge the site’s effectiveness she enlisted a group of 20 women, including her daughter and two daughters-in-law; forwarded links; and asked for comments.

The reaction was positive though at least one participant said she was not sure what she was viewing, asking, “Is the site geared for women’s questions about the car business?”

Read the complete article at the New York Times